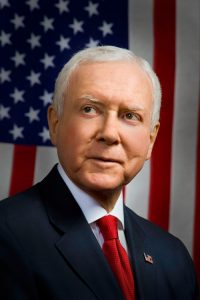 The statement that the Utah senator released was laced with quite a bit of double entendre. As you can see from the statement written out verbatim. Business Insider did a good job of reporting and highlighting the play on words.

“All the while the federal government strains to enforce regulations that sometimes do more harm than good. To be blunt we need to remove the administrative barriers preventing legitimate research into medical marijuana which is why I have decided to roll out the meds act.”

The bill, cleverly referred to as the “MEDS Act” is an acronym for the “Marijuana Effective Drug Study Act of 2017.” Several other senators have co-sponsored the bill including: Brian Schatz (D) of Hawaii, Chris Coons (D) of Delaware, Cory Gardner (R) of Colorado and Thom Tillis (R) of North Carolina.

While Hatch also alluded to this being a “kumbaya moment” for both parties, he still said he opposes the recreational use of marijuana completely. So while it’s a step in the right direction let’s not get too excited…. just yet.